Paying attention is half the battle but you both need to do it.

I knew that my marriage was floundering but I didn’t know how to fix it. Fifteen years in, enough of what we’d once had was so eroded that there wasn’t any real way of retrieving it. I think both of us were just sick and tired of the arguing, the relationship, and each other. 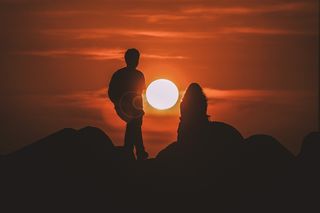 Some years ago, a wise therapist named Susan whose practice was mainly devoted to couples’ counseling confided a sad truth as we talked about whether joint therapy with my then-husband would work. She shook her head and then continued: “The reality is that it’s relatively rare that the counseling works because people wait too long. Therapy is usually seen as a last-ditch effort to salvage the marriage, and it’s not always agreed to in good faith either. A husband or wife may simply accede because he or she wants to be seen as ‘having tried everything.’ By the time they book an appointment with me, the marriage has been failing for years. And it’s just too late. For those couples, my office is just a stop and a parking lot away from the divorce lawyer’s.”

The behaviors that are warning signs
Expert John Gottman has long asserted that he can successfully predict whether a marriage will last by homing in on the absence and presence of certain key behaviors he calls “The Four Horseman of the Apocalypse.” They are, in his view, criticism, contempt, defensiveness, and stonewalling. He defines criticism as separate from complaint since criticism is highly personalized and accusatory; let’s say you are upset with your spouse for leaving the living room windows open with rain in the forecast and the curtains got soaked. Rather than addressing the issue, you begin with a litany of his or her flaws, with the words “You always” or “You never.”  Contempt includes responding to your partner’s words or thoughts with gestures that belittle or mock, or becoming verbally abusive by name-calling or assailing him or her with a litany of character “flaws.”  This isn’t just a power play and highly manipulative; it conveys how little you respect a person you are supposed to love and care about. Defensiveness is just what it sounds like: getting into a defensive crouch, denying responsibility, playing tit-for-tat, or making excuses for your words, behaviors, or actions. Of course, if criticism and contempt are already part of the landscape, defensiveness may be the only way to protect yourself from abuse. These three horsemen tend to show up together. Lastly, there is stonewalling, which is perhaps the most damaging of the four since it signals the end of dialogue and communication. The person stonewalling— according to Gottman, it’s the man 85% of the time—communicates disdain by folding his arms, not deigning to answer, and signals his smugness by the coldness of his glare. It’s the ultimate emotional shut-out and likely to provoke an outsized emotional response from his partner.

The more these behaviors become habitual, the more trouble the relationship is in. So it’s hugely important that you seek the advice of a marriage counselor at their first appearance. Time is of the essence.

Understanding Demand/Withdraw: the most toxic pattern of all

Yes, this one is the death knell for relationships and you’ll note that all of the behaviors catalogued by John Gottman actually dovetail into this larger pattern. It’s been studied often enough that it has an acronym (DM/W) and it’s not just a powerful predictor of divorce but also associated with depression, physical abuse, and the mental healthsymptoms of young adult children, according to a meta-analysis review conducted by Paul Schrodt and his co-authors.

Demand/Withdraw provides a snapshot of a relationship that has broken down irretrievably or is in the process. One partner makes a demand—most usually the woman but not always, according to research—and is answered by withdrawal or stonewalling. It’s worth saying that most theorists believe that the fact that the woman is most often in the “demander” position has to do with socialization. The problem with this pattern is that it has escalation built into it. The person making the demand feels it’s legitimate and will up the ante when greeted by silence while the person who’s withdrawn will only feel more beset and attacked. Importantly, each person feels victimized and is likely to justify her or his response. Yes, folks, welcome to the carousel you can’t dismount.

How your and your partner’s childhood experiences factor in

Not every person falls into the destructive patterns described by John Gottman and there’s research attesting to who is more likely to have their marriage or relationship shot down by DM/W: Those whose emotional needs weren’t met in childhood and have insecure attachment styles. This shouldn’t come as total surprise since securely attached people are capable of regulating their emotions and are comfortable articulating their own needs; they’re also more likely to choose partners who have the same skills. That’s simply not true of those who display one of the three insecure attachment styles: anxious-preoccupied, fearful– avoidant, or dismissive-avoidant. (My new  book, Daughter Detox(link is external), explores fully how your attachment style affects both your choice of partners and your relationships.)

Our experiences in childhood affect not just our need and tolerance for intimacy but our ability to engage in discussion without feeling threatened; this is especially true of those who have an avoidant attachment style. A study by Robin A. Barry and Erika Lawrence found that avoidantly attached husbands withdrew in direct proportion to the amount of negative affect expressed by wives in demand situations. This was true both in conflict situations and in those that required the husband to support and take care of his spouse. Similarly, avoidantly attached husbands who perceived discussions about solving problems in marriage as potentially destructive were much more likely to withdraw and disengage. But the anxious-preoccupied style that many unloved daughters display can equally provide the fuel for this toxic pattern. Always on the look-out for reassurance that she’s indeed loved and valued—and inclined to be hypervigilant about possible threats—her demands may well seem to suck the oxygen out of the room and cause her partner to withdraw under what feels like a siege.

In every relationship that’s troubled, there’s a point of no return that, unfortunately, can only be seen in hindsight. Following are some completely anecdotal tips drawn from my own experience and those of others; I am neither a therapist nor a psychologist. Again, working with a counselor needs to happen sooner rather than later.

1. You or your partner evade each other

This can be either literal or metaphorical—such as making sure you’re never in a position to have a private conversation, pulling out a cell phone or remembering an errand you have to run when your partner wants to talk, changing your schedule so there’s little time face-to-face. You or your partner may rationalize this as “turning down the heat” or “keeping the peace” but, if you actually hope to salvage the relationship, you need to call it out.

2.  Every conversation and interaction escalates

Walking on eggshells is unhealthy and when the petty begins to dominate—who filled up the car last, who didn’t flag the fact that we’re out of eggs—you’re in trouble as are your children if you have them. When you find yourself irritated by your partner’s familiar habits, the relationship is in deep waters.

3. One or both of you stop discussing major decisions or choices

A woman I know finally realized how bad things had gotten when she learned her husband of six years had applied for a job in another city without telling her; he had, however, mentioned to a neighbor with whom he commuted. Beginning to think of yourself as single isn’t a sign of independence in this context.

4. You or your partner display shifts in behavior

If you or your partner have difficulty talking about your feelings directly or even identifying them, the depth of someone’s unhappiness is sometimes communicated non-verbally through shifts in behaviors. Are you distracted most of the time and pretty much ignoring your spouse, focusing on personal goals that have nothing to do with your marriage? Does your partner seem distant and preoccupied? Are either or both of you avoiding physical contact?

5. You or your partner make it clear that you’re “done” talking

This is both manipulative and a power-play, and it could equally be called the “gauntlet” moment: You take it or leave it. No matter how hopeful you are for a resolution, you actually need to take your partner at his or her word because it’s really a declaration that he or she has absolutely no intention of changing. Period.

Whether a relationship can be salvaged depends on both partners as well as timing.

Schrodt, Paul, Paul L. Witt, and Jenna R. Shimkowski, “A Meta-Analytical Review of the Demand/Withdraw Pattern of Interaction and its Association with Individual, Relational, and Communicative Outcomes, Communication Mongraphs, 81,1 (April 2014), 27-58.

Barry, Robin A. and Erika Lawrence, “Don’t Stand So Close to Me: An Attachment Perspective of Disengagement and Avoidance in Marriage,” Journal of Family Psychology (2013), vol.27, no.3, 564-494.

The Top 3 Vulnerabilities That Ruin Your Relationship

Win Relationship Conflict By Letting Your Partner Win Too

Parenting Style – Do You and Your Spouse…

One Insanely Popular Way to Waste a Life…

7 Ways to Fall in Love With Your Husband Again