5 Myths About Depression We Need to Shut Down Immediately 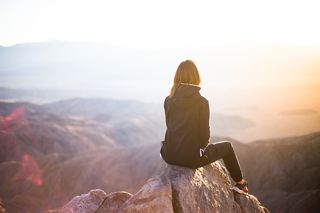 5 MYTHS ABOUT DEPRESSION WE NEED TO SHUT DOWN IMMEDIATELY

So long as misconceptions about mental illness persist, so too will stigma.

Depression, like art, can never be adequately described in words alone, though Andrew Solomon(link is external) comes close in his memoir Noonday Demon. In it, he writes:

I felt as though I had a physical need, of impossible urgency and discomfort, from which there was no release—as though I were constantly vomiting but had no mouth. My vision began to close. It was like trying to watch TV through terrible static, where you can’t distinguish faces, where nothing has edges. The air, too, seemed thick and resistant, as though it were full of mushed-up bread.

Through metaphor and allegory, Solomon draws a vivid picture of the ineffable, as have writers and artists throughout history, from the paintings of Edvard Munch and Vincent van Gogh to the writings of Sylvia Plath and Virginia Woolf.

Though words can do some justice and art can convey an essence, unless one has endured the experience, the intangible nature of depression, like other “invisible illnesses,” makes it that much more challenging for sufferers and non-sufferers alike to reconcile.

We often fear what we don’t understand, and both fear and lack of understanding breed fertile ground for stigma. Given that depression is estimated to become the second most common health problem(link is external) in the world by 2020, the fact that stigma continues to exist is a perplexing one. More disturbing is that because of such societal stigma, self-internalized stigma and shame are sometimes perpetuated. Given this, a large percentage of those who experience depression will not be treated.

Below are some common myths about depression explained.

Myth #1: “Depression is something you can simply ‘pull yourself out of’”

Depression is a disease of the brain. It is not a choice. “No individual would desire the symptomology it brings,” says Dr. Gabriella Farkas, founder of Pearl Behavioral Health & Medicine PLLC. “There are complex, reciprocal relationships between brain chemistry, functioning and environment.” She points out that neurological factors are largely beyond human control. “People may be predisposed to becoming or remaining depressed due the state of their brain alone [but] there are crucial, environmental factors.”

Myth #: 2: “Depression is something you can ‘think yourself out of’.”

Thinking positive thoughts, or choosing to see the glass as “half full” is a frequent suggestion offered in self-help books and some therapeutic modalities. For some this can be useful advice. However, to create a positive narrative around a negative situation requires our use of deliberate cognitive processes, according to Harold W. Koenigsberg, M.D., Professor of Psychiatry, Mount Sinai School of Medicine and founding board member of Hope for Depression Research Foundation (HDRF)(link is external), a NYC-based research foundation dedicated to finding a cure for depression. “In clinical depression, the bodily concomitants (e.g. low energy level, inability to activate pleasure circuitry, etc.) are fixed [and] cognitive patterns lose their flexibility. When this happens, it becomes hard to ‘pull oneself out.’”

When someone has a true debilitating diagnosis like major depressive disorder, simply getting out of bed to take a shower can feel physically impossible. As Solomon writes of his own experience,

I knew that for years I had taken a shower every day. Hoping that someone else could open the bathroom door, I would, with all the force in my body, sit up; turn and put my feet on the floor; and then feel so incapacitated and frightened that I would roll over and lie face down. I would cry again, weeping because the fact that I could not do it seemed so idiotic to me. At other times, I have enjoyed skydiving; it is easier to climb along a strut toward the tip of a plane’s wing against an eight-mile-an-hour wind at five thousand feet than it was to get out of bed those days.

Myth #3: “You must have a reason to be depressed.”

Depression is deceptive and as persuasive as a corrupt politician, convincing you of all sorts of untruths such as, “You have no right to be depressed. Look at all you have. You should be grateful.” Being clinically depressed requires no justification. Even though the world measures happiness through externals and then determines that you should be happy if you have enough, that doesn’t make it so.

Such remarks that come from loved ones, though they may be well-intentioned, only reinforce and worsen guilt, which is a common symptom of depression. Being clinically depressed requires no more justification than does getting the flu.

“Our culture often reinforces these beliefs.” says Suzanne Smolkin, LCSW-C, VP of Clinical Operations, Behavioral Health UM at HMC HealthWorks. “In books and movies the hero generally just sets her mind to doing something and accomplishes it through sheer willpower and grit. While that may work with many things,” she says, “dealing with depression is different. Depression saps the energy that helps us deal with things.”

Another important point Smolkin makes is that unlike many other medical conditions, depression distorts one’s perception of self and the world, and this is where self-blame(link is external)comes in. “When you are suffering from depression you often aren’t able to see the situation realistically or respond to it adequately without help.”

Myth #4: “If you can function, you must not be depressed.”

“When you have the flu, you stay home. With depression, it’s really quite hidden,” says Madisyn Taylor, founder of DailyOM and author of Unmedicated: The Four Pillars of Natural Wellness. “Many people with depression are still going to work and living their lives. We’re not wearing a cast, we don’t [always] have physical symptoms. It can be difficult because people don’t know.” Hence depression being referenced as an “invisible illness.”

Myth # 5: “If you were only strong enough, you wouldn’t be depressed.”

Being clinically depressed has nothing to do with strong or weak. In fact, it takes a great deal of courage to ask for help when you are suffering. From the depths of psychic pain, one often emerges with strength and a renewed appreciation for life. Many who have fought and clawed their way out of the abyss of depression (or another mental health condition) can truly appreciate the feeling of being liberated from its grip. Further, one who has been forced to fight against the tides of societal stigma, and thus self-shame, often has the character and depth of soul of a survivor.

“Being a survivor takes an enormous amount of strength,” notes Taylor, who says depression helped her survive a childhood trauma. “Depression was my friend for many years. It protected me, threw a blanket over me; it served a purpose for me.” Through her healing process, she says she found a well of strength that she never knew existed. “Most have it. They just need to find that spark.” For her, that spark was meditation. “It allowed me to quiet my mind, to hear my inner voice crying out for help.” Taylor attributes her success today to her experience. “I wouldn’t be doing what I do today if I hadn’t lived through and survived depression and anxiety.”

Rather than view a diagnosis of depression as a life sentence, what would it be like to embrace it as a challenge—to use it to grow and learn, to help others? What if the goal was the slow deterioration of any remnants of shame that remain in the minds of those who struggle with mental health conditions, as well as in the minds of those around them?

By talking about and normalizing mental health issues, perhaps more and more individuals will be inspired to share their stories. “We need the conversation to be out in the open, like so many other issues,” says Taylor. “It’s time for it to come into the light. When it’s in the shadow it can’t heal.”

How to Stop Holding On When You Need…

How to Find Time For Intimacy in Your…

How to Stop Holding On When You Need to Let Go

How to Find Time For Intimacy in Your Marriage

How to Stop Holding On When You Need to Let Go

How to Find Time For Intimacy in Your Marriage